Hemp absorbs more contaminants than most plants due to its composition. Some are fatal to humans. And since contamination can happen at any point in a plant's life, you should assess the safety and quality of your hemp multiple times.

Your COA can also protect you by representing unbiased quality and safety data from seed to shelf. For instance, if contamination or illness is later traced to a product formulated with your hemp, a COA can rule out liability on your part. Of course, cannabis is sometimes inhaled, which increases the human health impact of contaminants.

Below, we'll introduce you to eight essential hemp tests for consumer safety and quality assurance. You can access other sources of information through the provided links. And you'll gain valuable insight into several contaminants.

Heavy Metals, such as lead, mercury, cadmium, and chromium, are rarely metabolized and can amass in the human body. Each metal affects the body differently. And accumulation can lead to health problems, from mild headaches to fatal cancers. See the image below.

The cannabis industry only recently started identifying some contamination risks.

Cause of Heavy Metal Contaminants in Hemp

Heavy Metals are introduced throughout the growing season in several ways, including

After the growing period, there are other contamination opportunities, such as contact with certain metals, plastics, additives, and formulation processes or ingestion-aiding devices for the final hemp product.

A notable investigation found that storing hemp in some plastic containers resulted in heavy metal contamination. Interestingly, cadmium is used in many plastics, most commonly in yellow, orange, red, and recycled plastics. So we recommend that hemp businesses only use food-grade storage containers.

The first step to avoiding heavy metal contamination is to verify that no heavy metals are present in your soil.

Next, you need to ensure the supplier reputation and material quality of everything you'll use in production and growing, like water sources and fertilizer. You can request test analyses from your suppliers or perform independent tests if you're an indoor grower. And always test for heavy metals in your hemp between life and production stages.

There are currently 59 pesticide products registered for use on hemp. The list initially included nine biopesticides and one conventional pesticide. This list will continue to be updated with EPA tested and approved pesticides.

Risks of Pesticide Contaminants in Hemp

Health effects vary depending on the type of pesticide. Some chemicals, such as organophosphates and carbamates, affect the nervous system. Others can irritate your skin, jeopardize the hormone/endocrine system, or cause cancer.

Many industries have discussed the impact of pesticides for years. And it's unlikely that we're at the end of those conversations.

Causes of Pesticide Contaminants in Hemp

Unapproved pesticides for cultivation are the primary source of pesticide contamination in hemp. Initially, the EPA did not accept any pesticide usage. There are now 59 pesticides products registered for use on hemp - far more than the initial nine biopesticides and one conventional pesticide.

The list will continue growing as the EPA approves more pesticides.

No matter your diligence in avoiding unapproved products, pesticide contamination sometimes occurs. In such cases, it's thought that contamination often results from leftover pesticides in the soil used with earlier crops or drift from nearby applications.

The best way to prevent pesticide contamination in hemp is to refrain from using products with unapproved ingredients. So, familiarize yourself with and work within the guidelines of the EPA-approved pesticides list.

You can also check with neighboring farms to see if their pest control plans might cause unapproved pesticides to drift onto your plants. A friendly conversation can put your mind at ease or help you reach a collaborative solution, like accommodating each other's needs by adjusting buffer zones or planting schedules. Or it can help you spot concerns that require significant attention to prevent problems, like planting rows of trees to protect your crops from drift.

Risks of Microbial Contaminants in Hemp

Certain microbes are dangerous to humans, and individuals with weakened immune systems are exceptionally susceptible. Some pathogens can even be deadly, especially with elevated levels of exposure.

Some risks associated with microbes

Download your Hemp Industry Basics free copy to learn more about these and other microbes.

Causes of Microbials Contaminants in Hemp

Microbial Contamination can happen at any point in a plant's lifecycle. For instance, introducing aspergillus to your hemp is primarily prevented with healthy soil, but the right conditions can quickly turn product packaging into a carrier of spores. The packaging can then contaminate the product itself.

Microbes also thrive in environments with high humidity and temperature. Because of that, even after you seal the cannabis in containers and send it to the dispensaries, microbial contamination tests may reveal failing levels of yeast and mold.

When growing hemp indoors, a controlled environment is necessary to ensure cannabis does not become contaminated.

Unfortunately, even following the best cultivation practices will only get you so far. Your entire supply chain must work together to ensure your products reach the consumer in the pristine state they leave your grow facility, and you can't control that.

There is some good news, however. Microbial contamination can usually be remedied without damage to the final product. For example, you can kill the microbes in harvested cannabis before packaging and then store the hemp in a suitable microenvironment. You can also perform Moisture/Water Content tests to confirm your flowers are adequately dry before storing them.

Risks of Residual Solvents in Hemp

Using residual solvents in small amounts is sometimes allowed in the processing and manufacturing of hemp products. And exposure levels generally correlate with health risks.

Some common symptoms of residual solvent intoxication include nausea, headache, dizziness, and vomiting.

A small collection of residual solvents and their health risks

Causes of Residual Solvents in Hemp

Residual Solvents are commonly used in extracting cannabinoids from the hemp plant. And many concentrates are produced by using hydrocarbons (i.e., butane and propane), ethanol, or carbon dioxide to extract THC, CBD, terpenes, and more.

Although other extraction methods are available, some cannabis producers have not yet stopped using solvent extractions to isolate cannabinoids and other desirable compounds from their plants.

There are a couple of ways you can prevent contamination by residual solvents.

A recommended method for contamination testing is the headspace analysis. Also, processors who do not use solvent extraction methods should always test their products before selling to support their solvent-free claims.

Risks of Mycotoxin Contaminants in Hemp

Mycotoxins (Aflatoxin B1, B2, G1 and G2, and Ochratoxin) are organic compounds and secondary metabolites produced by fungi.  They are among the most dangerous contaminants and may cause severe illness or death.

The WHO also recognizes products with more than 1 mg/kg of aflatoxins as potentially dangerous or life-threatening. Accordingly, most Industrial Hemp standards in the United States require mycotoxin levels below 20 parts per billion (ppb).

Cause of Mycotoxin Contaminants in Hemp

Powdery mildew and bud rot are common forms of mycotoxin-created molds. And cannabis is most prone to mold and fungi based on cultivation conditions such as water saturation of late harvests. However, excess moisture isn't the only cause of mycotoxin contamination.

Like microbial contaminants, mycotoxins can be introduced to cannabis at many points during harvest and processing. For instance, inspects in your post-harvest storage can create a perfect breeding environment for fungi and bacteria.

Some ways mycotoxins are introduced:

Mitigation after mycotoxin contamination is challenging, so prevention is always the best remedy. Since the hemp industry is young, we also evaluate how testing benefits more mature markets.

Agricultural markets depend on mycotoxin testing to ensure consumer safety. For instance, mycotoxin testing is essential to most grain commodities analyzed by our sister company, North Dakota Grain Inspection. Some of the grain they test include wheat, corn, and soybeans.

There are also rules under the FDA that don't allow blending grain above 20ppb with clean grain to lower the test results. And you may need to destroy the grain if aflatoxin is high.

As you've seen in the examples, moisture content and water activity tests ensure product safety from microbial and mycotoxin contamination.

Terpenes make your hemp strains unique and exciting and can be an excellent component of your product marketing. Cannabinoids may get all the attention, but your cannabis wouldn't be as effective or flavorful without terpenes!

Some of our favorites

The potency of the cannabinoids in your hemp product isn't a contamination issue. But, it is a significant pricing factor for buying and selling. The percentage of total or specific cannabinoids often influences prices.

Why evaluate the Cannabinoid Profile/Potency at every lifecycle stage 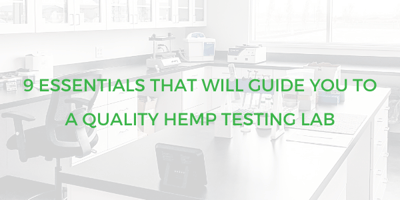 The hemp industry can be challenging... then add in the stress of not knowing if you have quality... 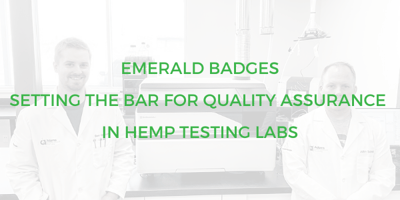 Why You Should Have a Lab that Does Emerald Testing

Finding a quality lab can be difficult. This blog will help you understand one of the key items...

3 Times you Should Test your Hemp: Tips for Processors

This article will explain when and why processors should test their hemp throughout the extraction...